On 14th and 15th July there is the Vintage for Victory festival on the library gardens in Whitchurch.

We have the opportunity to to have a stand and generate a bit of publicity for the club but we need to be able to have it manned from 10am to 5pm on both Saturday 14th and Sunday 15th.

Several members of the committee have already volunteered to cover Saturday and Sunday morning but we currently have no-one for Sunday afternoon. This coincides with the Wimbledon men’s final.

We need two volunteers to man the stand from 1.30 to 5pm on Sunday 15th July. The stand will be a mini-tennis court with a chance for children to play with sponge or mini-red balls. The job will also involve taking the opportunity to do some PR for the club – hand out flyers etc.

Volunteers will have to pay entry but this will be covered by the club. Also, to fit in with the festival theme, those on the stand will have to be wearing some vintage tennis gear – sounds challenging but hopefully time to sort this out!

This would be a great opportunity for us to get the club seen and spoken about. If you can help out it would much appreciated.

If we do get this up and running we will be making an appeal to members for any old tennis kit, wooden rackets, tennis presses etc.

We will be hosting a French Open themed Social Tournament at WTC on Thursday 7th June from 6.30pm. Social tournaments are open to players of all abilities and are a great way to meet new members and enjoy some friendly competition. There will be food available, also with a French theme, including French cheeses, homemade pate, French bread and more.

Also, upcoming dates for your diaries:

Finally, a gentle reminder for everyone who has reserved a ticket to the Anniversary Dinner, can you please pay for your ticket within the next week or so and let Fiona Roberts know your choice for each course.

The Whitchurch Tennis Club Anniversary Dinner will take place at the club on Saturday 16th June from 7.30pm.

This year the catering will again be in-house, with several club members providing excellent food, including a vegetarian option (see attached menu for full details). 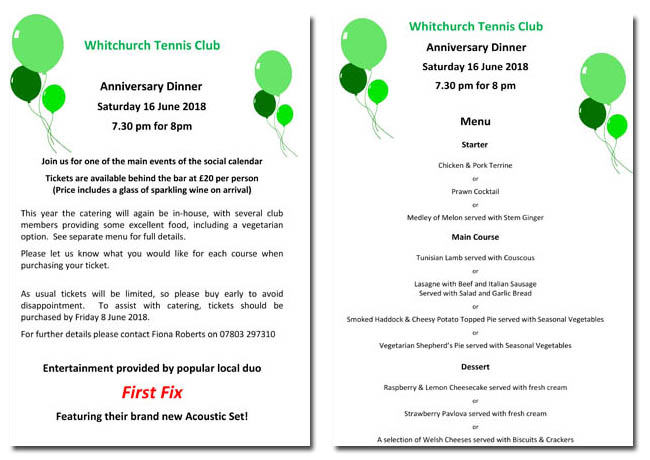 Tickets are available to purchase now from the bar at £20 per person, including a glass of sparkling wine on arrival. Live entertainment will be provided by popular local duo First Fix, performing their brand new accoustic set.

As usual tickets will be limited, so please buy early to avoid disappointment. To assist with catering, tickets should be purchased by Friday 8th June. For further details please contact Fiona Roberts on 07803 297310.

Starting at 1pm on Saturday 21st April, the WTC Open Day is a great opportunity for existing and prospective members to come and enjoy the club’s fantastic facilities, with lots of things going on for all:

1pm – 4pm: Coaching demos from Head Coach, Melissa Davies.
1pm: YC Sports, Racquet demos.
2pm – 4pm: American Tournament (all members and guests welcome to join in).
4pm: Light refreshments in the bar. Courts will be open to all for the afternoon and we’d really like to encourage existing members to mix in with our guests. The bar will also be open from 1pm onwards. Come down to the Club to stay active and healthy, socialise and have fun!

See the WIMBLEDON DRAW page for details of which tickets the Club have been allocated.

Only those club members who have a LTA British Tennis Membership and who ‘opted in’ via the LTA website by the middle of February are eligible to enter the draw on the night. If you’re lucky enough to get your name drawn out of the hat, payment will be made direct to the LTA on line.

Good luck to all!

Coaching can improve your game no matter what your age or level. Check out Melissa’s Summer Coaching Programme which starts from the 16th April or contact her for further details … 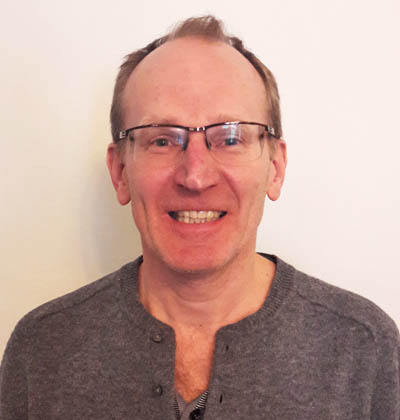 Another season is nearly upon us and the gauntlet is down to produce a season as successful as the last one! Huge thanks go to Steve Cumines who has stood down as chair after many years on the club committee. In 2017 the club scored well on a number of fronts …

We are delighted with the engagement we have had with children. We have had 150 children on coaching programmes without counting those who have come to tennis camps – a really positive sign for tennis participation in the future. Alongside this we have had strong growth in our junior membership and a huge surge in minis membership – we now have nearly 70 minis and some promising tots too!

For those who have started to make the move into competition the club has run grade 4/5 tournaments, mini-red and mini-orange tournaments as part of the Tennis Wales circuit. We also had 10 youngsters involved in Aegon team events.

Schools and the Community

Drawing youngsters into tennis begins by offering a chance to feel what its like with a racquet in hand. We are delighted by the success of the free taster sessions which coach Melissa has run for year one and two children in the local primary schools. This delivered taster sessions to 420  children in the area from Whitchurch Primary, Coryton Primary, Melin Gruffydd Primary and Hawthorn Primary.

This relationship with the schools is followed through with coaching for older children at Whitchurch primary. Melin Gruffydd Primary use the club for year 3 and 4 pupils.

The club has also delivered LTA initiatives – free 6 week coaching session for children aged 5- 8 who are new to tennis and a Tennis Tuesday for girls and ladies only. It really has been a busy year for children’s tennis!

We  are proud of our community connection and to have welcomed Melin Gruffydd Primary and Cylch Meithrin to stage successful fundraising events at the club. We have taken bookings for charity causes on a number of further occasions.

Again we take huge satisfaction in our membership growth over the last 12 months. The growth in junior and minis membership has been the most spectacular and vindicates our view that the competitive pricing makes it fantastically good value. Alongside this we introduced a special membership category for parents of youngsters and this has proved hugely popular – numbers have tripled to 33.

Away from our activity with children we have also seen seen a 10% growth in senior membership. This gives us great encouragement for the future and confirmation of the local demand for tennis.

It has been a busy time on the courts. We ran successful summer and autumn club tournaments with high levels of participation which threw up some highly competitive matches and drew worthy winners on finals days.

In competition we have continued to punch above our weight. We fielded 2 women’s teams and 3 men’s teams in the South Wales summer doubles leagues. The most notable success was the promotion earned by the men’s first team to Premier Two,  the second from top division in the South Wales League. The women’s first team narrowly missed out on promotion after battling in a play-off game.

The action doesn’t stop for winter! We fielded two men’s teams and a womens’ team in the Cymru Kitchens league. On top of that a men’s teams and a two women’s teams competed in the winter veterans’ league, all three teams winning promotion. The men’s and women’s veterans teams will compete next winter in the top South Wales divisions.

We look forward to the 2018 season with a strong committee, stable finances and a great base from which to grow our reputation as a club proud of its hundred year history, offering great facilities and offering a family-friendly face to our local community.

Thanks for your support,

Come to see the club and bring a racquet (if you have one!) and get out on court with some of our members.

Adults and Juniors of all ages and standards from beginner to advanced are very welcome!

Melissa’s popular school holiday Tennis Camps are back for Easter. Tennis, games, prizes and fun for all!

The cost is £10 per day for members and £12 for non-members. Discounts for 3 sessions.

This year’s Wales Six nations rugby matches will again be shown on the big screen at the Whitchurch Tennis club, starting Saturday 3 February afternoon for the opener versus Scotland.  Dates and kick-off times below.

Clubhouse and bar will  open 30 mins before kick off. Come along to have a drink with friends and enjoy the highs and lows of a narrow Welsh victory / honorable Welsh defeat (delete as appropriate).

Great Finals Day last Saturday with a lot of very good tennis all round. Check out the album of some of the photos from throughout the day 🎾🏆🏅 https://t.co/fLpbLe7PjO @AnnaMcMorrin @whs_cardiff @mywhitchurch @Whit_Llandaff #Tennis #Whitchurch #SaveWTC