The public meeting to raise awareness of Whitchurch Tennis Club’s fight to retain its lease was held on 25th of October 2018. It was extremely well attended with over 150 members, local residents and community representatives including Anna McMorrin MP, Julia Morgan AM, Councillors Tim Davies and Linda Morgan, who all confirmed their support for the Club. Julie Morgan AM pledged to work on a cross party basis to do all they can to stop the club’s closure. Mark Lewis from Tennis Wales, and on behalf of the LTA, confirmed their full support for the Club in its fight.

On the night a brief outline of the history of the Club was given by our President, Frank Rees, including reference to a previous threat when the club was situated behind Park Road, causing it to be re-sited to St. Francis Road in 1946. At that time the Hughes family, grandparents of our current landlords, had the foresight to retain the site as a green space for leisure in the area. He also mentioned how in 2012 at the Club’s Centenary Dinner the landlords spoke of their proud family association with the Club and their ongoing support: “We wish the club every success in the centenary and for the next 100 years”.

Addressing the audience, our Club Chairman, Mike Lubienski, noted that, ironically, as we face our greatest challenge yet, the club is thriving on and off court, with a strong balance sheet, growing membership, our teams are flourishing and with over 150 local children participating in the coaching  programmes run at the club.

Mike informed those present of how potential development of the Club could affect not only 300+ members but also our neighbours and people in the wider Whitchurch and North Cardiff communities. He also highlighted the club’s excellent relationship with local primary and secondary schools, which use the facilities on a regular basis and the detrimental effect it would have on them.

The situation is serious. Our current lease ends on the 31st December 2019. The lease ran from 1980 for 30 years with an option to extend for another 10.  We exercised that option to extend in 2007 and at that time sought to discuss a further extension. From that time on we have sought to engage with the landlords on an extension to the lease, in particular during 2012 when they were hugely supportive of our centenary, formally during our regular rent reviews and with many official approaches from the committee at other times.

Most recently, at the end of 2017, the outgoing Chairman wrote and was told the landlords would respond within 6 months. The 6 months passed in June and despite many approaches from the club Chairman and the media no response has been forthcoming. Whilst the family has a long tradition with the club and has always been supportive the refusal to enter into dialogue with the Club is hugely concerning .

That is why the club has, reluctantly, gone public with its concern, is taking legal and planning advice and has launched a public petition. We are also looking to launch a fundraising campaign and that is why we need your support.

If you are not able to do that paper copies are available at the club and encourage your friends to do so – we have already met our original target of 1,000 signatures. That shows the level of support we have and we are now working towards 5,000 signatures. Please encourage your friends and family to support us and follow the Club on Facebook and/or Twitter and to check the Club’s website for updates. In addition social membership at the Club until March 29th 2019 was offered on the night at £10 per person and take up has been good. Finally, campaign sub committees have been set up, including members of the local community who were keen to support us in our efforts.

We will keep you informed of our efforts to ensure that this historic and vital community asset survives for the next 100 years as the landlord previously publicly stated.

Over 150 members, local residents and community representatives crammed into the Clubhouse on Thursday 25 October. The public meeting was held to inform everyone of the situation we are facing with the expiry of our lease on the 31st of December 2019. The packed meeting was informed how the Club has attempted on multiple occasions to open discussions with our landlords for an extension or renewal of the lease but have received no response from them since December 2017.

Our MP for Cardiff North, Anna McMorrin, addressed the meeting to help kick-start the campaign to save the Club in its current location in St Francis Road, together with local Assembly Member Julie Morgan and officials from Tennis Wales. The Club has been part of the fabric of Whitchurch for over 100 years and has provided a valuable recreational resource for local people, schools and the wider community at its current site for over 70 years. 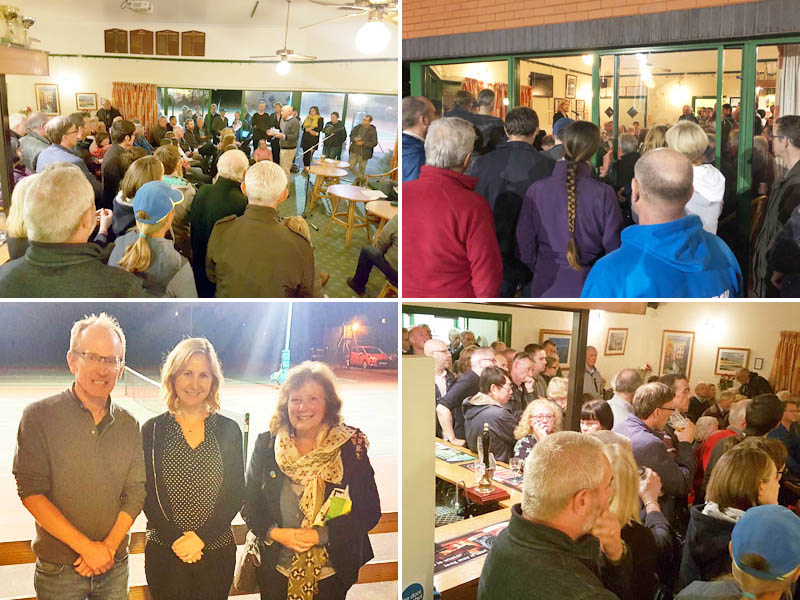 An on-line petition has been launched to allow all those concerned from the local area and the tennis community across Wales to voice their concern and show their support for the club. To make your voice heard, please sign the petition by clicking on the link below:

If you have any questions for the club please e-mail us on info@whitchurchtenniscardiff.co.uk or contact us through our Facebook or Twitter accounts. Your support for our cause is greatly appreciated. 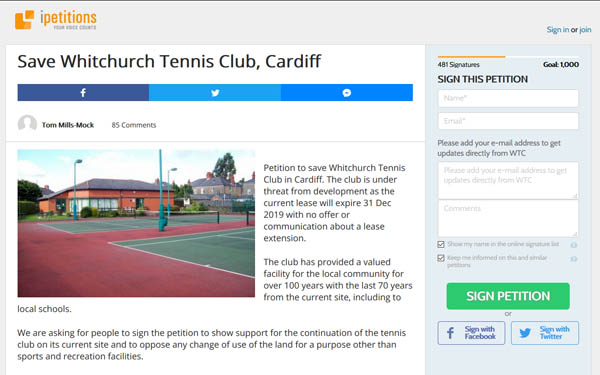 Following the Public Meeting to highlight the threat to the future of the Club on its present site, an ON-LINE PETITION has been launched. The club is under threat from development as the current lease will expire 31 Dec 2019 with no offer or communication about a lease extension from the landlords.

The club has provided a valued facility for the local community for over 100 years with the last 70 years from the current site, including to local schools.

We are asking for people to sign the petition to show support for the continuation of the tennis club on its current site and to oppose any change of use of the land for a purpose other than sports and recreation facilities.

Please show your support and sign the on-line petition which can be accessed by clicking the link below:

There will be a public meeting held at the Club on Thursday 25th October at 7.30pm to discuss the current situation regarding the Club’s lease and the threat of land development. Our local MP will be in attendance and the meeting is due to be covered by the BBC. All members, neighbours and interested parties are urged to attend.

For further details in English and Welsh please click on the PDF file below:

Whitchurch Tennis Club abides by the General Data Protection Regulation (GDPR) principles as per the Data Protection Act (2018) with regard to the personal data of members. This is set out in the Club’s new Privacy Policy which has been developed in line with the guidelines of the Lawn Tennis Association.

The PDF file of the Whitchurch Tennis Club Privacy Policy can be found in the Club Rules section of the website, or by clicking the link below:

The Summer Tournament Finals will be played this Saturday 8th September from 11am.
The Order of Play is:

Times are subject to change based on length of matches / weather etc.

Melissa’s Autumn Coaching Programme is running from 10 September right through until 16 December. With group coaching categories for adult and juniors of all levels, plus individual tuition if you prefer, you’re sure to find something that will help you improve your game.

Our Junior Summer Tournament is on Saturday 25th August:

Please register with Melissa by the 20th August, or get in touch with her if you’d like more info.

Junior Box Leagues – these are also underway. Junior box leagues are open to all members from orange ball to yellow ball, with prizes for box winners and most matches played. Please register with Melissa to be assigned to a box of suitable standard.

Social Tennis and Barbecue this Thursday (26th July) evening at Whitchurch Tennis Club, all members welcome – come and enjoy a friendly game of tennis and make the most of the warm summer evenings!

Melissa’s very popular Tennis Camps are back for the Summer Holidays! Serious fun for minis and juniors – plus improve your tennis at the same time …. 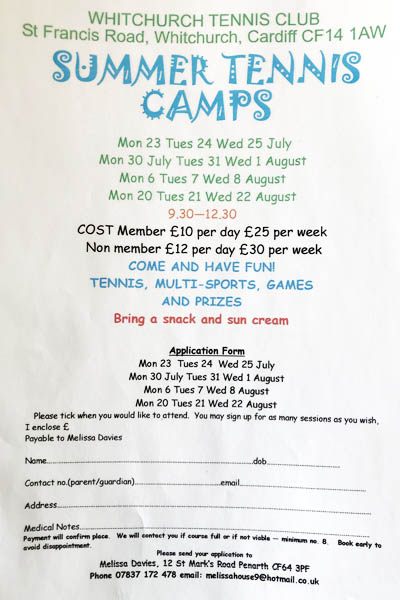 Book your places early by seeing Melissa at the Club or contact her on 07837 172478 / melissahouse9@hotmail.co.uk

🎾🏴󠁧󠁢󠁷󠁬󠁳󠁿 | From Monday 22nd June you can get #BackToTennis in Wales based on the following restricted guidance: https://t.co/bdCYKiuEWp

We are delighted that we will finally be able to get back on court following the First Minister’s announcement today.

We have been preparing for re-opening and liaising with @tenniswales to have all necessary measures in place to ensure that risks are kept to a minimum.