Whitchurch Tennis Club celebrated its centenary in 2012 but can trace its origins back to a small rough patch of grass sandwiched between two private orchards at the back of Park Road, Whitchurch.

Originally established as Park Lawn Tennis Club (PLTC) in 1912, the club boasted three original grass courts. A marquee masqueraded as the pavilion and, because of the original committee’s links to Bethel Baptist Chapel, play was available from Monday to Saturday only.

The Club struggled through the First World War but then prospered during the 20’s and 30’s with the increasing popularity of all outdoor games and increased leisure time. Great Britain’s dominance of the Davis Cup in the 1930’s under the leadership of Fred Perry further promoted the Club’s cause - membership was up and so were the lady members’ hem-lines!

PLTC was not alone in flying the flag for tennis participation in Whitchurch; there were other well-established clubs in the community - Greenclose, Llandaf, the Civil Service courts behind the Fox & Hounds, St. Mary’s, the YMCA tennis courts and the strong and fashionable Whitchurch Lawn Tennis Club at St. Francis Road.

However, the outbreak of World War II and its aftermath saw the demise of many of these local clubs. Owing to the dedication and spirit of just 7 or 8 regular players, PLTC continued to operate. Not even a German land mine, which landed just thirty yards from the Club pavilion causing severe damage in 1941, could interrupt play.

After the war, just as membership was gradually returning to pre-war levels, the Club’s landlord died and without the finance to buy the land itself, the Club was to be replaced by a small market garden. However, with Whitchurch LTC now defunct, a deal was struck which allowed PLTC to re-locate to the St. Francis Road site.

During the 1964 season the club replaced one grass court with its first hard court and immediately reaped the benefits of a playing surface more suited to the typically unpredictable British weather. Two more grass courts were replaced by hard courts by the early 1970s. PLTC continued to experiment with court surfaces and, in 1981 thanks to various council grants, were able to replace the hard courts with an innovative reinforced interlocking plastic playing surface. These were affectionately known by members as the ‘Lego’ courts - but not so affectionately known by visiting teams as “those b***** courts”! Unsuspecting opponents enjoyed numerous electric shocks from touching the metal net posts on the ‘Lego’ which added to the excitement during a change of ends in a league match.

1991 saw the beginning of a phase of development which established the club facilities very much as they are today. Construction of a new clubhouse began and opened in June 1992. The three remaining grass courts were replaced with 3 new hard courts, 2 of them floodlit (Courts 1 & 2). Now ‘lawnless’, the club became Whitchurch Tennis Club (WTC). The three ‘Lego’ courts (Courts 4-6) were soon replaced by three new hard courts and in 1999 a seventh hard court, also equipped with floodlights, was added. With the new tarmac car park, Whitchurch Tennis Club completed its development as a first-class facility for the community. Indeed, over the years many local sporting clubs have been affiliated to PLTC and later WTC and have used the clubhouse as their base - Park Lawn AFC, Whitchurch Mens Hockey and St Fagans Ladies Hockey and Whitchurch Heath Cricket Club. 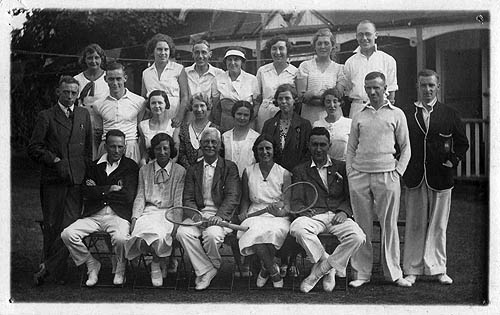